One of the most important responsibilities of an open source program office is ensuring that your organization meets its legal obligations when integrating open source code with proprietary and third-party source code in your commercial products.

You need to establish guidelines on how developers can use open source code, and detailed processes to track where open source code is coming from, how it’s licensed, and where it ultimately ends up. This guide gets you started with a baseline compliance program for using, releasing, and distributing open source code.

Why track and review code?

Simply stated, if your company isn’t tracking how and where its developers use open source code, you’re at risk of non compliance with applicable open source licenses — this can be an expensive path to go through both in terms of legal fees and engineering time spent to correct the error. Ignoring your open source legal obligations also has repercussions for your company’s reputation in the open source community.

An open source program office helps centralize policies and decision-making around open source consumption, distribution, and release, tracks code provenance and use, and ensures the organization doesn’t run afoul of its compliance obligations.

“A well-designed open source compliance process should simultaneously ensure compliance with the terms of open source licenses and also help companies protect their own intellectual property and that of third-party suppliers from unintended disclosure and/or other consequences.”

View All Guides »
Contribute on GitHub »

There are several benefits companies can experience from maintaining an open source compliance program:

The core team, often called the auditing team or the Open Source Review Board (OSRB), consists of representatives from engineering and product teams, one or more legal counsel, and the Compliance Officer (who is typically the open source program manager).

Other individuals across multiple departments also contribute on an ongoing basis to your open source compliance efforts: documentation, supply chain, corporate development, IT, localization and the Open Source Executive Committee (OSEC) which oversees the overall open source strategy. But unlike the core team, members of the extended team are only working on compliance on a part-time basis, based on tasks they receive from the OSRB.

The OSRB is in charge of creating an open source compliance strategy and a set of processes that determine how a company will implement these rules on a daily basis. The strategy establishes what must be done to ensure compliance and offers a governing set of principles for how employees interact with open source software. It includes a formal process for the approval, acquisition, and use of open source, and a method for releasing software that contains open source or that’s licensed under an open source license.

The usage policy is an essential component of any compliance program. This set of rules is included in your open source strategy document (you have one, right?) and made available to everyone for easy reference.

The usage policy ensures that any software (proprietary, third-party, or open source) that makes its way into the product base has been audited, reviewed, and approved. It also ensures that your company has a plan to fulfill the license obligations resulting from using the various software components, before your products make it to customers.

There is no need to make a lengthy or complicated document. A good open source usage policy includes six simple rules:

Once you have a policy in place, you must plan and create a process that makes it easy to apply the policy.  Your job is to grease the wheels for developer use of open source and contribution to open source projects.

“If your code review process is overly burdensome, you’ll slow innovation or provide a good excuse for developers to circumvent the process completely.”

The process begins by scanning the source code of the software package in question, then moves on to identifying and resolving any discovered issues, performing legal and architectural reviews, and making a decision regarding the usage approval.

The diagram, below, illustrates a simplistic view of a compliance usage process. In reality, the process is much more iterative in nature. Keep in mind that these phases are for illustration purposes and may need to be modified depending on your company’s own needs and open source program configuration.

Let’s walk through each stage in the process.

In the source code scanning phase, all the source code is scanned using a specialized software tools (there are many commercial vendors that offer such tools in addition to a couple open source alternatives).

This phase typically kicks off when an engineer submits an online usage form. (See the sample usage form and rules for using it, below.) The form includes all the information about the open source component in question, and specifies the location of the source code in the source code repository system.

The form submission automatically creates a compliance ticket in a system such as JIRA or Bugzilla and a source code scanning request will be sent to the designated auditing staff.

Periodic full platform scans should also take place every few weeks to ensure that no open source software component has been integrated into the platform without a corresponding form. If any was found, then a JIRA ticket is automatically issued and assigned to the auditing staff.

Some of the factors that can trigger a source code scan include:

After the code is scanned, the scanning tool produces a report that provides information on:

It is vital to archive open source packages downloaded from the web in their original form. These packages will be used in a later stage (prior to distribution) to verify and track any changes introduced to the source code by computing the difference between the original package and the modified package.

In the identification and resolution phase, the auditing team inspects and resolves each file or snippet flagged by the scanning tool.

For example, the scanning tool’s report can flag issues such as conflicting and incompatible licenses. If there are no issues, then the compliance office will move the compliance ticket forward to the legal review phase.

If there are issues to be resolved, then the compliance officer creates subtasks within the compliance tickets and assigns them to the appropriate engineers to be resolved. In some cases, a code rework is needed; in other cases it may simply be a matter of clarification. The sub-tasks should include a description of the issue, a proposed solution to be implemented by engineering, and a specific timeline for completion.

The compliance officer may simply close the subtasks once all issues are resolved and pass the ticket along for legal review. Or they might first order a re-scan of the source code and generate a new scan report confirming that earlier issues do not exist anymore. Once they’re satisfied that all issues are resolved, the compliance officer forwards the compliance ticket to a representative from the legal department for review and approval.

In preparation for legal review, you should attach all licensing information related to the open source software to the compliance ticket, such as COPYING, README, LICENSE files, etc.

In the legal review phase, the legal counsel (typically a member of the open source review board, or OSRB) reviews reports generated by the scanning tool, the license information of the software component, and any comments left in the compliance ticket by engineers and members of the auditing team.

When a compliance ticket reaches the legal review phase, it already contains:

The goal of this phase is to produce a legal opinion of compliance, and a decision on the incoming and outgoing license(s) for the software component in question. The incoming and outgoing licenses are in the plural form because in some cases, a software component can include source code available under different licenses. There are three possible outcomes at this stage:

If there are no issues with the licensing, the legal counsel would then decide on the incoming and outgoing licenses of the software component and forward the compliance ticket one step further in the process into the compliance architectural phase.

During legal review, the legal counsel will need to decide on the incoming and outgoing license(s):

If a licensing issue is found, such as mixed source code with incompatible licenses, the legal counsel will flag these issues and reassign the compliance ticket in JIRA to engineering to rework the code.

In some cases, if the licensing information is not clear or if it is not available, the legal counsel or engineering staff members contacts the project maintainer or the open source developer to clarify the ambiguities and to confirm under which license that specific software component is licensed.

In the architecture review, the compliance officer and an engineering representative on the auditing team or open source review board perform an analysis of the interaction between the open source, proprietary, and third-party code. This is accomplished by examining an architectural diagram (see an example, below) that identifies:

The result of the architecture review is an analysis of the licensing obligations that may extend from open source to proprietary or third-party software components (and across open source components as well).

The final review is usually a face-to-face meeting of the auditing team or open source review board (OSRB) during which the team approves or rejects the usage of the software component.

The team bases its decision on the complete compliance record of the software component, which includes the following:

Steps accomplished after the OSRB approval

Initial compliance, also called baseline compliance, happens when development starts, and continues until the release of the first version of the product. The compliance team identifies all open source code included in the software baseline, and drives all of the source components through the five-stage approval process outlined above.

Initial compliance, also called baseline compliance, happens when development starts, and continues until the release of the first version of the product. The compliance team identifies all open source code included in the software baseline, and drives all of the source components through the five-stage approval process outlined above.

Incremental compliance requires a comparatively smaller effort as opposed to the efforts involved in establishing baseline compliance. But several challenges can arise.  You must correctly identify the source code that changed between version 1.0 and version 1.1, and verify compliance on the delta between the releases:

The obvious question is: How can we keep track of all of these changes? The answer is simple: a bill of material difference tool (BOM diff tool). Given the BOM for product v1.1 and the BOM for v1.0, we compute the delta and the output of the tool is the following:

With this information in hand, achieving incremental compliance becomes a relatively easy task:

The diagram, below, provides an overview of the incremental compliance process. The BOM file for each product release is stored on the build server. The BOM diff tool takes two BOM files as input, each corresponding to a different product release, and computes the delta to produce a list of changes as previously discussed. 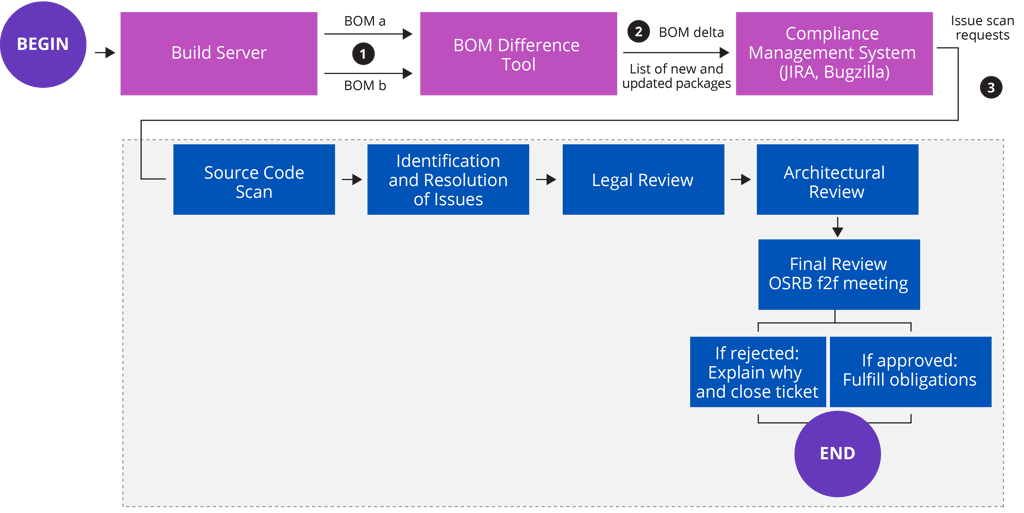 Completing the open source usage request form is an important step when developers bring open source software into your company, and should be taken very seriously.

The table, below, highlights the information requested in an open source usage request form. Usually, these values are chosen from a pull-down menu to make the data entry efficient.

There are several rules governing the OSRB usage form, for instance:

Open source compliance is an essential part of the software development process. If you use open source software in your product(s) and you do not have a solid compliance program, then you should consider this guide as a call to action.

This work is licensed under a Creative Commons Attribution ShareAlike 4.0 International License.