I am not here to argue the merits of this nearly 20-year-old case (in fact, I coincidentally had friends on both legal teams), but it was when I was introduced to the idea of companies that purchase patents with the goal of using this purchased right to extract money from other companies.

Patents are an important legal protection to foster innovation, but, like all systems, it isn’t perfect.

At this week’s  Open Source Summit North America, we heard from Kevin Jakel with Unified Patents. Kevin is a patent attorney who saw the damage being done to innovation by patent trolls – more kindly known as non-practicing entities (NPEs).

Kevin points out that patents are intellectual property designed to protect inventions, granting a time-bound legal monopoly, but they are only a sword, not a shield. You can use it to stop people, but it doesn’t give you a right to do anything. He emphasizes, “You are vulnerable even if you invented something. Someone can come at you with other patents.”

Kevin has watched a whole industry develop where patents are purchased by other entities, who then 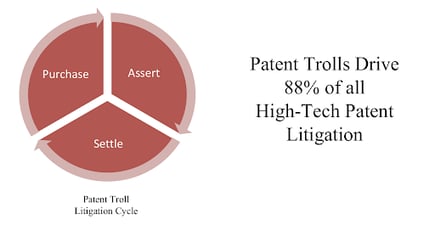 go after successful individuals or companies who they claim are infringing on the patents they now legally own (but is not something they invented). In fact, 88% of all high-tech patent litigation is from an NPE.

NPEs are rational actors using the legal system to their advantage, and they are driven by the fact that almost all of the time the defendant decides to settle to avoid the costs of defending the litigation. This perpetuates the problem by both reducing the risk to the NPEs and also giving them funds to purchase additional patents for future campaigns.

In regards to open source software, the problem is on the rise and is only going to get worse without strategic, consistent action to combat it. 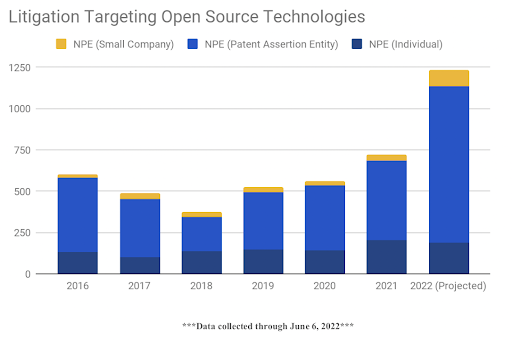 Kevin started Unified Patents with the goal of solving this problem without incentivizing further NPE activity. He wants to increase the risk for NPEs so that they are incentivized to not pursue non-existent claims. Because NPEs are rational actors, they are going to weigh risks vs. rewards before making any decisions.

How does Unified Patents do this? They use a three-step process:

Unified Patents works on behalf of 11 technology areas (they call them Zones). They added an Open Source Zone in 2019 with the help of the Linux Foundation, Open Invention Network, and Microsoft. They look for demands being filed in court, and then they selectively pick patent trolls out of the group and challenge them, attempting to disrupt the process. They take the patent back to the U.S. Patent and Trademark Office and see if the patent should have ever existed in the first place. Typically, patent trolls look for broad patents so they can sue lots of companies, making their investment more profitable and less risky. This means it is so broad that it probably should never have been awarded in the first place.

The result – they end up killing a lot of patents that should have never been issued but are being exploited by patent trolls, stifling innovation. The goal is to slow them down and eventually bring them to a stop as quickly as they can. Then, the next time they go to look for a patent, they look somewhere else.

And it is working. The image below shows some of the open source projects that Unified Patents has actively protected since 2019. 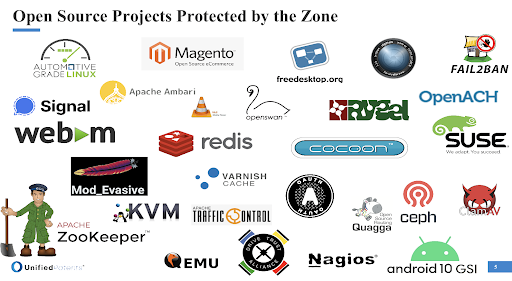 The Linux Foundation participates in Unified Patents’ Open Source Zone to help protect the individuals and organizations innovating every day. We encourage you to join the fight and create a true deterrence for patent trolls. It is the only way to extinguish this threat.

And if you are a die-hard fan of the BlackBerry’s iconic keyboard, my apologies for dredging up the painful memory of your loss.