Like many of the folks in open source, the LF’s Kenny Paul is a huge fan of building things out of LEGO. For Kenny however, it goes a bit beyond just opening a box and following the instruction book. In fact, he rarely ever builds anything from a kit, instead building highly complex and detailed models entirely from his imagination. Yes, for you LEGO Movie fans, Kenny is a Master Builder.

“When I get a new kit I usually look at it in terms of pure raw material rather than whatever is shown on the box”, he says with a smile radiating the possibilities. That approach seems to have worked quite well for him for a long time now. Over the holiday season he builds a 120 square foot display in his garage that often draws 300+ people a day, he worked on the Mythbusters’ Giant LEGO Ball episode (#117), he has scale models of farm equipment in the permanent collection of a local museum, and in January of 2020 he finished second in a competition for one of LEGOLand’s coveted LEGO Master Model Builder positions, of which there are only 13 in all of North America. 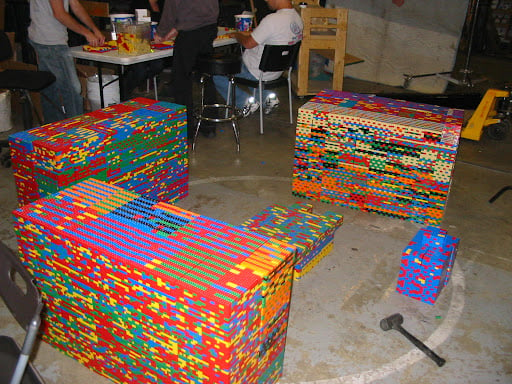 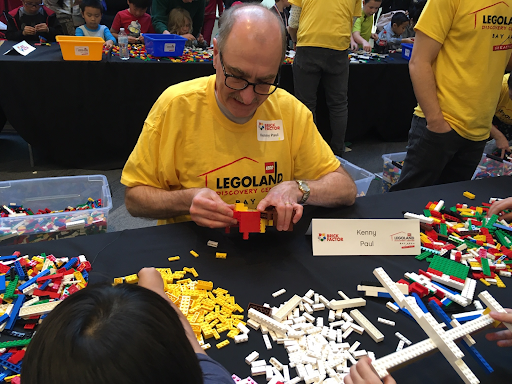 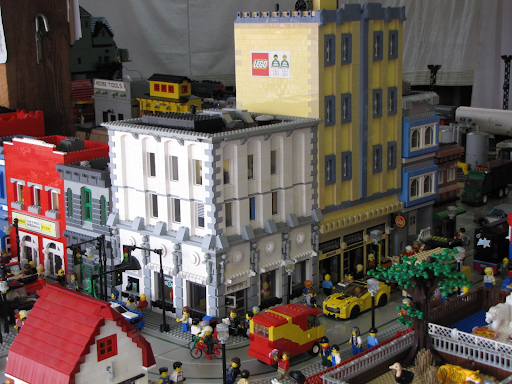 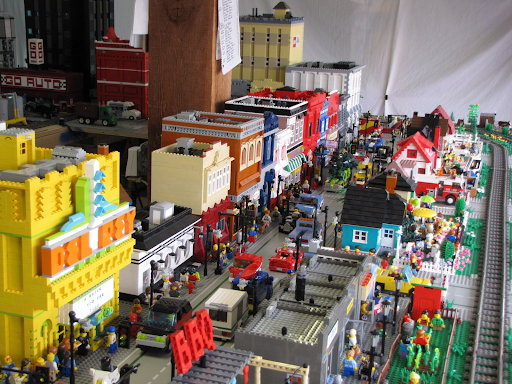 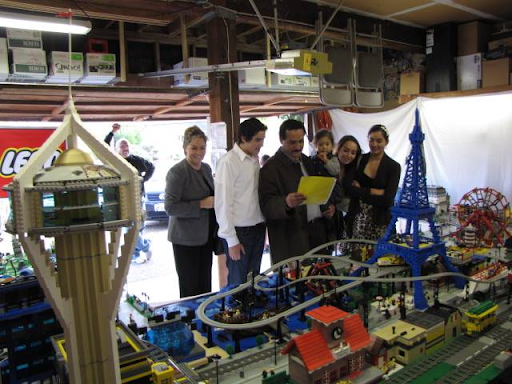 However, he recently finished a project that he says has been the most difficult and meaningful project he has ever been a part of. The subject matter revolves around a troubling chapter in American history and a small bit of rock and scrub brush in the middle of San Francisco Bay called Angel Island.

Ask your average 4th grader if they have ever heard of Ellis Island and they can probably tell you at least something about the well-known narrative surrounding immigration and the United States. Ask them about Angel Island, however, and you’ll probably get a confused look and a shake of the head.

Although Angel Island was often called, “The Ellis Island of the West” in the early 1900s, it was anything but welcoming. In reality it was established specifically for the purpose of excluding immigration for those of Asian descent and Chinese immigrants in particular. It wasn’t a place for, Give me your tired, your poor, your huddled masses… It was more like, Nope, talk to the hand.

When Japan attacked the US Naval base at Pearl Harbor on December 7th, 1941, Angel Island took on an entirely new role during the early stages of the war, but one that was unfortunately still in line with its original anti-Asian roots. Many people are still unaware that following Pearl Harbor, the US Government, on the orders of President Franklin D. Roosevelt, rounded up thousands of US citizens and put them into internment camps for the duration of the war simply because of their Japanese ancestry. Yes, that’s right. This included US citizens who were officially reclassified as enemies of the state purely based upon their heritage. For the first wave of those who were incarcerated, Angel Island was used as the processing center before they were sent off to one of the infamous internment camps across the US, like Manzanar, Tule Lake, or Heart Mountain.

How to educate children about the history?

Remember how we mentioned 4th graders earlier?  Well, learning about California history is a pillar of the 4th grade curriculum here in the Golden State and that is what led to this particular project. The problem? Hundreds of 4th graders tour Angel Island every year – How do you engage them on very painful and hard to understand subject matter like internment?  Well, the folks from the California State Park system and the Angel Island Immigration Station Foundation, which runs the museum there, thought that a LEGO model of the site as it existed during WWII might help bridge that gap.

AIISF reached out to the local LEGO club in the Bay Area in August of 2021 to see if anyone might be interested in volunteering for a project. A number of folks joined the introductory Zoom call, but after hearing the scope of what was being requested, it was clear that this was a long duration project that would take months to complete. After that first meeting, only Kenny and two other members of the club, Johannes van Galen and Nick McConnell, agreed to proceed with the build.

The model was unveiled as the center anchor point for the exhibit, “Taken From Their Families; …” in May, which is Asian & Pacific Islander Heritage Month. Measuring 4 feet by 6 feet, it contains an estimated 30,000 LEGO pieces. The trio invested over 400 hours between research, design, procuring the parts, and of course the build itself.

Getting the model to the museum was no easy feat either. It had to be built in sections, moved by van about 60 miles from where it was being constructed, taken over to the island on a state park supply ship, then reassembled and “landscaped” once on site. 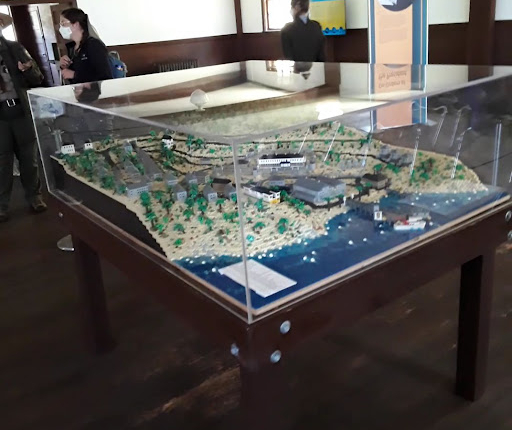 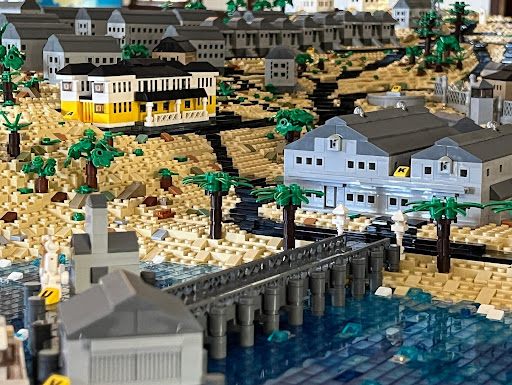 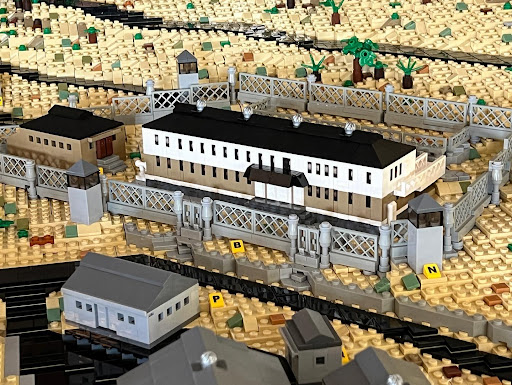 “The research aspect was really fascinating to me”, said Kenny, who was responsible for building all of the buildings. He spent countless hours pouring through archival photos and diagrams and topographic maps provided by the state park and even went as far as looking at records from the Library of Congress in some cases. The goal was to be as accurate as possible while still working within the limitations of scale, plus LEGO part and color availability.  In one case that research took an unexpected turn that as Kenny puts it, “Stood the hairs up on the back of my neck.”

The largest building in the camp during WWII was still under construction when the war broke out. It replaced a previous building which burned to the ground in 1940. After Pearl Harbor, the new building was rapidly completed and pressed into service. Following the War, it was bulldozed by the Army. The problem was that no one working on the project could figure out what that building actually looked like. Only two grainy photos of the WWII era building could be found and neither photo made sense when compared to the building foundations that can still be seen on the island today. Then Kenny realized a well-known watercolor drawing in the museum’s collection solved the puzzle. The most remarkable aspect of the drawing is that the entire camp is depicted the way it looks from offshore rather than as viewed from the perspective of the detention barracks where prisoners were held. The realization was stunning – it was painted from memory by the artist. It was the way he saw the island the day he steamed into San Francisco Bay from Hawaii as a political prisoner of his own country. Smiling as tears well up in his eyes, Kenny says, “Every time I think about the fact I needed a painting made by one of the very first Japanese Americans arrested during that time to complete a scale model of that same camp 80 years later, it always chokes me up.”

Every time I think about the fact I needed a painting made by one of the very first Japanese Americans arrested during that time to complete a scale model of that same camp 80 years later, it always chokes me up.

The model is now on permanent display in the same mess hall that was used by the prisoners. For more information on the exhibit, please see https://aiisf.org/taken.

Kenny Paul works as a Senior Technical Community Architect at the Linux Foundation. He currently works on the Open Network Automation Project (ONAP) and LF Networking. His is just one of the many unique backgrounds that make up the people behind open source. To hear more stories, listen to our Untold Stories of Open Source podcast.

And on a related aside, this is a gripping and heart-warming story about bonds made at the Heart Mountain Japanese internment camp in Wyoming.

Below are photos of some of Kenny’s favorite builds. 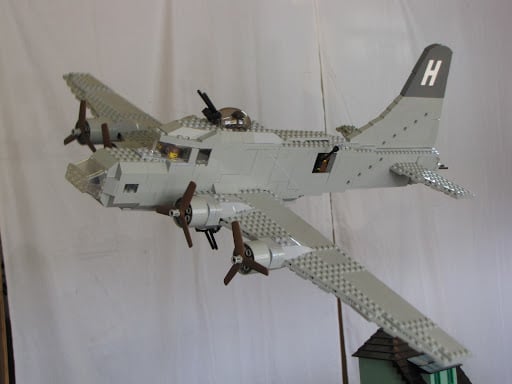 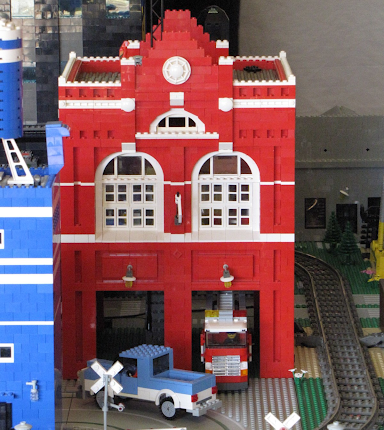 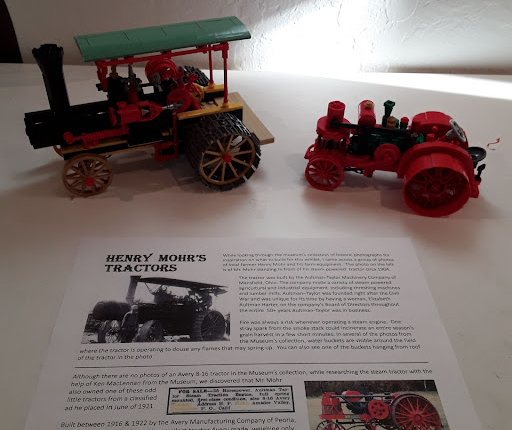 Photos: Some of Kenny’s favorite builds: B-17; Firehouse #7 in Washington, DC, home to the first all-black engine company in the days of departmental segregation between 1919 and 1962; and, LEGO tractors built for a museum display.